Developers of the massive Parkside at Shelby Farms next week will start asking local government bodies for $96.4 million in tax-increment financing to help pay for Shelby Farms Parkway and other public improvements.

That money would be part of the $172.4 million in extra property tax revenue developers expect the mixed-use project to generate over the next 20 years.

The six partners of the 60-plus acre development of apartments, a hotel, retail and offices now expect to spend $375 million building Parkside.

Parkside’s boundaries form the profile of a poodle sitting atop Shelby Farms Park. The development of more than 20 buildings, parking facilities, promenades and green spaces will fill in the northwest corner of Mullins Station and Whitten Road.

The developers will go before the Economic Development Growth Engine (EDGE) board on Wednesday seeking a tax increment financing (TIF) district that surrounds and extends from Parkside.

They will also need approval from the City Council and County Commission in coming weeks.

Inside those TIF borders, any growth in property tax revenues above the baseline year would be earmarked for building public infrastructure supporting Parkside.

The developers calculate that over the 20-year life of the TIF, the extra property taxes will total $172.5 million.

The developers propose receiving $96.4 million of that for their project ($71.7 million for the public improvements and the rest to pay the cost of the TIF bonds). Another $37 million in extra property taxes would go to the county and $38.9 million would go to the city.

Uses for the money

Here’s how the developers propose using the TIF money:

Rush hour traffic congestion is already notorious in and around Shelby Farms. Now, 39,805 to 47,186 vehicles cut through the park on the east-west Walnut Grove. Others back up in the park on the north-south Farm Road.

Adding 1,400 apartment units, a 130-room hotel and 33,000 square feet of retail and service space on the park’s north edge would be difficult without traffic relief.

Completion of the long-planned, long-debated and long-delayed Shelby Farms Parkway appears integral to Parkside’s development. The 2.5-mile, divided four-lane road – its impact on the park softened by curves and a median with trees – would provide a north-south route through the west end of park.

The proposed TIF money would provide all of the local share for the road’s construction, the Parkside developers say.

Environmental approvals for the parkway have been delayed since last year when the Tennessee Department of Transportation cited concerns about the way traffic demand was projected.

The owners out front for the project the last few years, when it progressed through the planning process, were Bob Turner and Doug Windham.

As African-Americans, Anderson and Strickland give the project minority representation in a black-majority city. Strickland is senior vice president for Workforce Development at the Greater Memphis Chamber. Anderson is a retired BlueCross BlueShield of Tennessee executive.

The owners also have pledged that at least 28 percent of project spending will go to minority contractors, said Dexter Muller, the former Chamber executive who consults for the project as a financial analyst through his company, Pinnacle Planning Advisors.

The construction of Parkside at Shelby Farms does not depend on developers signing tenants or making other deals, Muller said.

The entire project should take five to six years to complete.

Part of the construction process for this ambitious development project will involve the use of prefabricated buildings.

These buildings will be used to store valuable construction equipment and they will also provide shelter to ensure that building work will take place on schedule and within budget.

The work is divided into eight phases, which would generally be completed starting at the east side and moving west.

The EDGE board will consider the TIF application when it meets at 3 p.m. Wednesday at the Memphis Area Association of Realtors, 6393 Poplar. 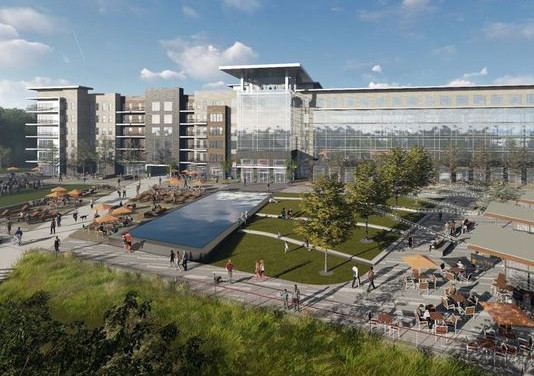