Allen & Hoshall was retained by the town of Winchester to provide architectural and engineering services to renovate an existing 11,900-square-foot building for the design of a functional 21st-century main fire station. The building was constructed in 1964 as an automotive sales and service dealership. In 1970, there was an addition to the main building, and the facility operated in that capacity until 2005. Thereafter, the facility housed a custom window manufacturer until recently.

The town of Winchester was excited to repurpose the facility because of its location on a major access road into town and the ability to provide a new municipal facility on a previously run-down site. The project provided an opportunity to design a state-of-the-art facility that has pull-through apparatus bays and adequate support space to ensure the safety of the fire station staff. Additionally, this allowed the fire station to be moved from the existing confines of the in-town location that was adjacent to the city hall. This change does not only happen externally but internally too with the addition of new technology such as fire department records management software to bring everything up-to-date and working to its best level to serve the community.

The facility is zoned into three areas, which consist of administrative/office, apparatus bays and residential areas. The administrative space includes a large area for the display of an antique fire engine and equipment off of the main entry lobby as well as office and conference room spaces. The 5,360-square-foot apparatus area features three 80-foot pull-through bays and one partial bay for an EMS vehicle. The residential areas provide space for nine sleeping rooms, restrooms, a dayroom/kitchen area, decontamination space and workshop areas. The approximate 1.5-acre site provided the opportunity for separate vehicular circulation for the fire/emergency equipment with full pull-in to the station and direct exit to the adjacent main road as well as ample space for staff and public parking that’s separate from the emergency vehicle circulation. 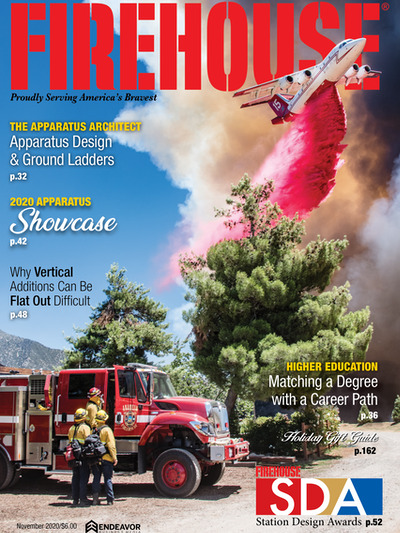